Three full-day excursions are integrated into the middle of the conference programme, offering unique first-hand insight into the 2012 Preonzo rockslide site, ongoing fracture development in the 30 year old Bedretto tunnel, challenges associated with construction and maintenance of the 220 m high Contra (Verzasca) arch dam, and Quarternary fracture development and the granitic-gneissic landscapes along the Schöllenen Gorge and the Gotthard Pass. 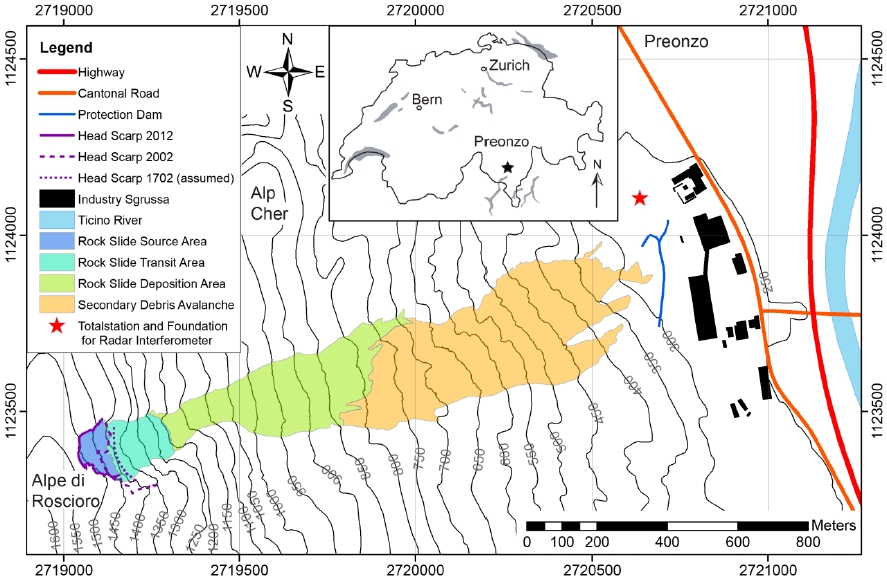 Fig. 1: Overview and location of Preonzo instability complex with deposits of the 2012 event.

Background
The Preonzo instability complex is situated above the village of Preonzo in the Rivera valley of southern Switzerland (Canton Ticino) and located at Alpe di Roscioro. The rocklsope in the release is composed of high-grade metamorphic amphibolites and biotite-muscovite gneisses with an Alpine foliation dipping with about 20 degrees into the slope. Detailed geological and structural descriptions are given in Willenberg et al. (2009) and Loew et al. (2016). The Preonzo slope failure of May 2012 (220’000 m3) is part of a series of retrogressive rockslides which have been described in Gschwind et al. (2016). The piedmont region at the slope toe is occupied by industrial facilities, a cantonal road and a transnational highway. In the past centuries, the Preonzo instability complex has generated significant damages and risks, which has led to detailed structural and kinematic investigations since 1990, and the installation of an early warning system in 2010, prior to the catastrophic slope failure of May 2012. We therefore dispose of a unique data set describing the long term and short term evolution of this rockslope instability up of the time of failure. Detailed investigations of the release surfaces and displacement patterns are underway and allow investigating fundamental aspects of progressive failure at rockslope scale. 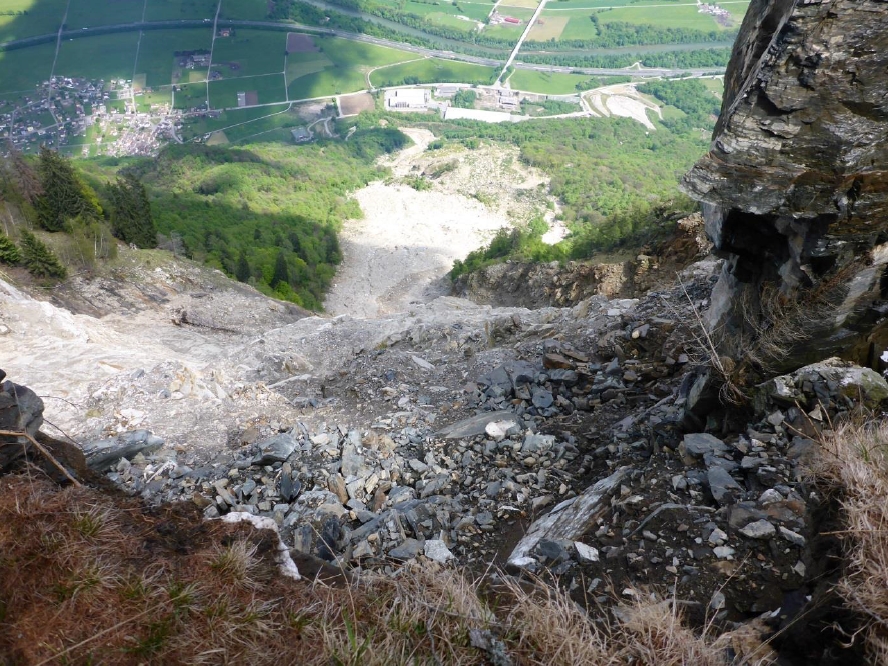 Fig. 2: View from the crown of the 2012 failure (at Alpe di Roscioro) down to the deposits in the mid-slope area and industrial facilities at the slope toe. 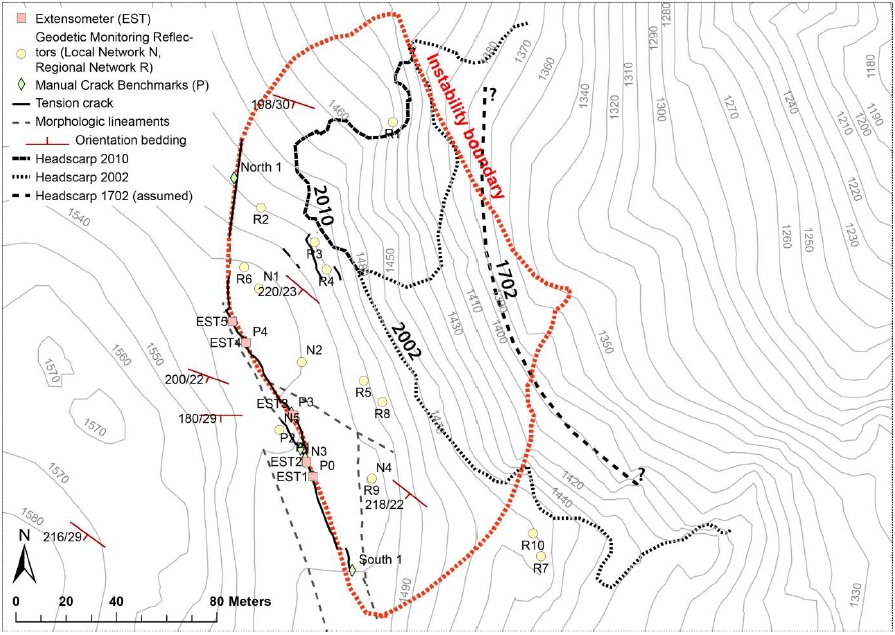 Excursion Program
The excursion starts with visits to the industrial area, the study of runouts and deposits of past failures from Alpe di Roscioro, the discussion of protection measures and remote monitoring systems at the slope toe. Then we will drive to an Alpine meadow in the mid slope area (at 950 m a.s.l.) and hike along a steep trail to Alpe di Roscioro (1520 m a.s.l.). Hiking takes about 90 minutes and requires good physical conditions. Optionally we might offer helicopter flights at extra costs (about 200 CHF one way). At Alpe di Roscioro we study in-situ monitoring and early warning systems, as well as the progressive formation (propagation and displacement) of extensional fractures since 1990. We study detailed structures exposed in the 2012 release surfaces and temporal and spatial behaviour of reflector displacements within the unstable rock mass. In the afternoon we return to the Alpine meadow in the mid-slope and pick up our busses. If time permits we will study the Verzasca Concrete Arch Dam on the travel back to Ascona. 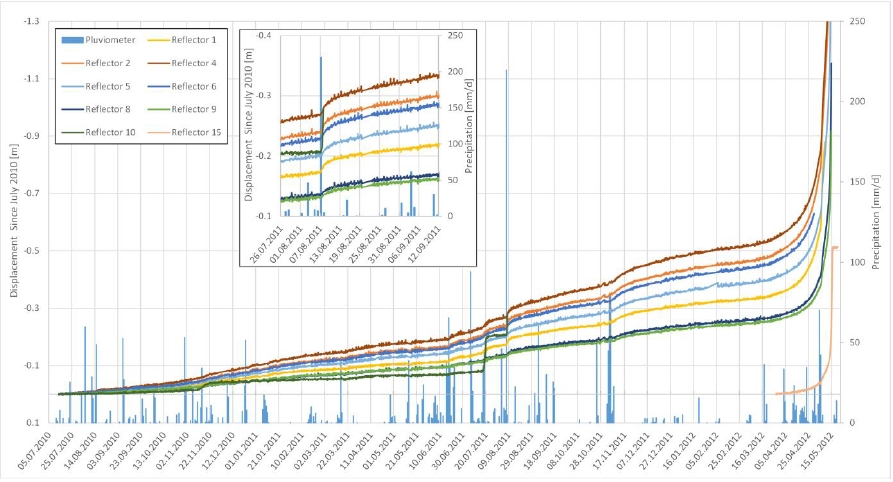 Fig. 4: Displacement time series of crack extensometers between 2010 and catastrophic slope failure of May 2012.

The Furka-Oberalp railway line presents the only all-year-round east west connection in the Swiss Alps. It serves to link the holiday resort areas in the Valais, Central Switzerland and the Grisons, as well as efficient local transportation. Construction of the Furka (Base) Tunnel began in 1972 and was completed in 1982. To help speed up the construction time, and due to the difficult geological and hydrogeological conditions, an access adit was constructed from the Bedretto Valley. This Bedretto adit was also an optional rail link to the south that was never established. The adit starts in the south passing through a large toppling landslide mass and intersects the the Rotondo Granite until it meets the Furka Tunnel after a total length of 5.2 km (Figure 1). Significant spalling during construction was observed in the Rotondo Granite and this spalling activity continues to this day (Figure 1). Water inflows during construction, ranging from 180-240 l/s, also contributed to the difficult tunneling conditions. Blocky sections and many brittle-ductile fault zones were encountered, often leading to collapse and part way through the construction it was decided to introduce exploratory holes from the face to minimize the danger of high water ingress and / or face collapse.  As the Bedretto adit is unlined and not used as a traffic corridor, it served as unique research and teaching lab of the Chair of Engineering Geology during the last 15 years (Ofterdinger et al.2004; Lützenkirchen et al 2011). During the tour, you will have the opportunity to see the challenging geological and construction conditions and to observe the progressive spalling processes which continue to this day. 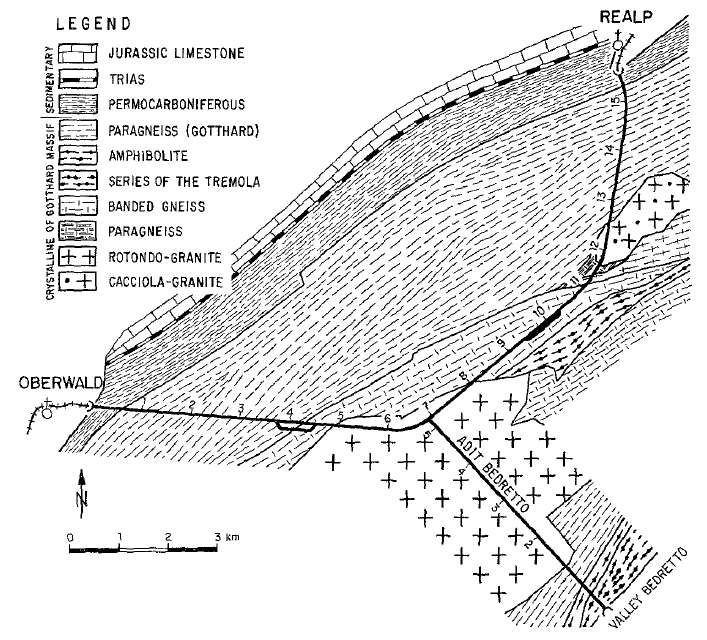 Figure 1: Plan overview of the Furka base tunnel from Realp to Oberwald and the Bedretto Adit with the sidewall spalling and toppling land slide sections indicated with arrows (modified after Huber 2004).

The excursion starts with a train ride in the Furka Tunnel from the Oberalp portal to the intersection with the Bedretto adit. Here at the intersection the discussion will begin with the geological and hydrogeological setting with particular emphasis on the spalling phenomena (Figure 2), tunnel collapse in Alpine fault zones and transient pore pressures and water inflows. We will examine the various degrees of spall damage as we walk through many fault zones and examine an abandoned face that collapse during construction. Further along, we will see the deepest section of the tunnel, faults architectures and inflow monitoring stations, and continue walking to the Bedretto Valley portal. As the rocks transition to paragneisses and amphibolites we will enter a large and several 100 meters deep toppling landslide mass that the tunnel bisects. We will investigate the detailed structures and water inflows at the toppling hinge line, basal and internal shear zones, and the detailed international structures associated with the landslide mass from within the tunnel and in the southern portal area before boarding the bus back to Ascona for dinner. The tour will be a total of 5 km hiking through the Bedretto adit on rough ground with high water inflows and no light. It is recommended to bring a rain jacket and sturdy hiking boots.

More details of this day will be given at a later stage.

Background
The Schollenen Gorge and Gotthard Pass are located in the central Swiss Alps in granites and gneisses of the Aar Massif and Gotthard Massif (Fig. 1). Before the Gotthard railway tunnel opened in 1881, paths and later roads along the Schollenen route and over the Gotthard Pass were some of the most important trade infrastructures across the Swiss Alps. The region remained important thereafter and transport capacities were increased with the Gotthard road tunnel (1980) and the just opened Gotthard base tunnel (2016), which directs some of the rail traffic east of the Gotthard Pass region.
The morphology of the two areas has been shaped by glacial erosion during multiple glaciations, but also fluvial and mass wasting processes altered the landscape decisively. Glacial erosion did not only affect the landscape form but also had a strong impact on the rock mass. New fractures have formed subparallel to the glacially polished bedrock surface. These fractures are known as sheeting or exfoliation joints and are limited to the shallow rock mass, as deep as about 200 m below the bedrock surface (e.g., Bucher and Loew, 2009; Ziegler et al., 2013). Recent investigations of these particular joints in the Schollenen Gorge and in similar rock masses of the adjacent Grimsel region (Fig. 1) revealed that there exist several distinct exfoliation fracture generations, which can be associated with the changing landscape, i.e. exfoliation fractures formed during different time spans of the Quaternary. The individual joints propagated in a discontinuous and slow manner, with fractographic joint features telling us stories about the fracture processes and the likely stress conditions during fracturing (Ziegler et al., 2014, 2015; Fig. 2). Exfoliation fracture occurrence, together with intersecting tectonic fractures, leads to frequent rock slope instabilities (mostly rock falls) in the steep Schollenen Gorge (Fig. 3). Despite manifold and massive road protection, rock fall events frequently damage road and railway infrastructures and also claimed lives in the past. 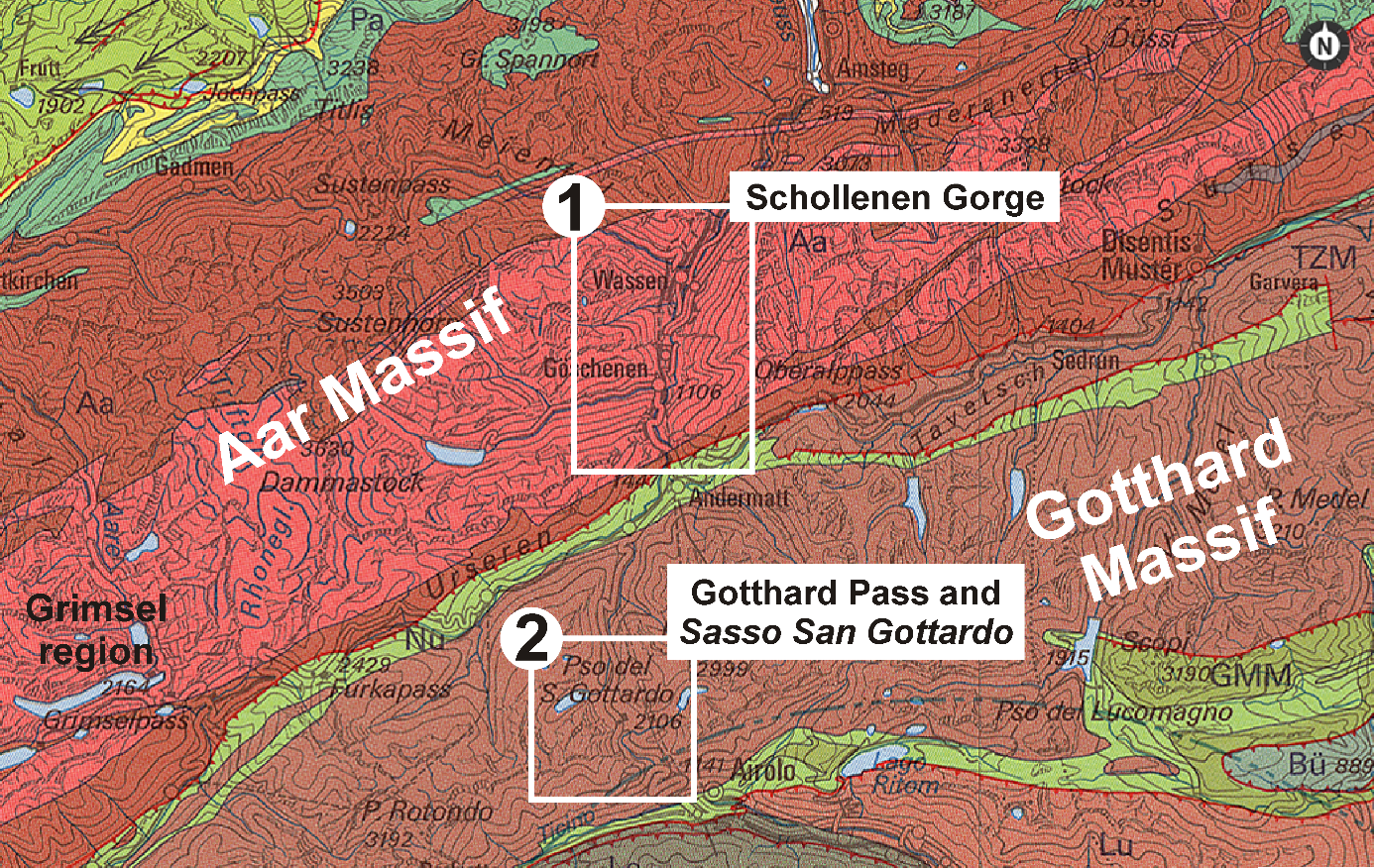 Excursion Program
The excursion starts at the so-called Devil’s Bridge above the Schollenen Gorge where we will get an overview of the region and its history as one of the most important travel and trading routes in Switzerland. Then we gently hike down on an ancient trade path cutting through the granitic-gneissic landscape of the Schollenen Gorge where we can discuss glacial and fluvial landscape evolution, the rock mass structures, and the formation processes of young fractures. We will continue our excursion and drive a short distance to see the areas of recent rock fall failures, associated with glacial and post-glacial fracturing that damaged traffic infrastructures, and discuss road and railway protection measures. In the afternoon we will explore the underground military fortress Sasso San Gottardo at the Gotthard Pass and enjoy the fascinating glacial landscapes around it.
More details of this day will be given at a later stage. 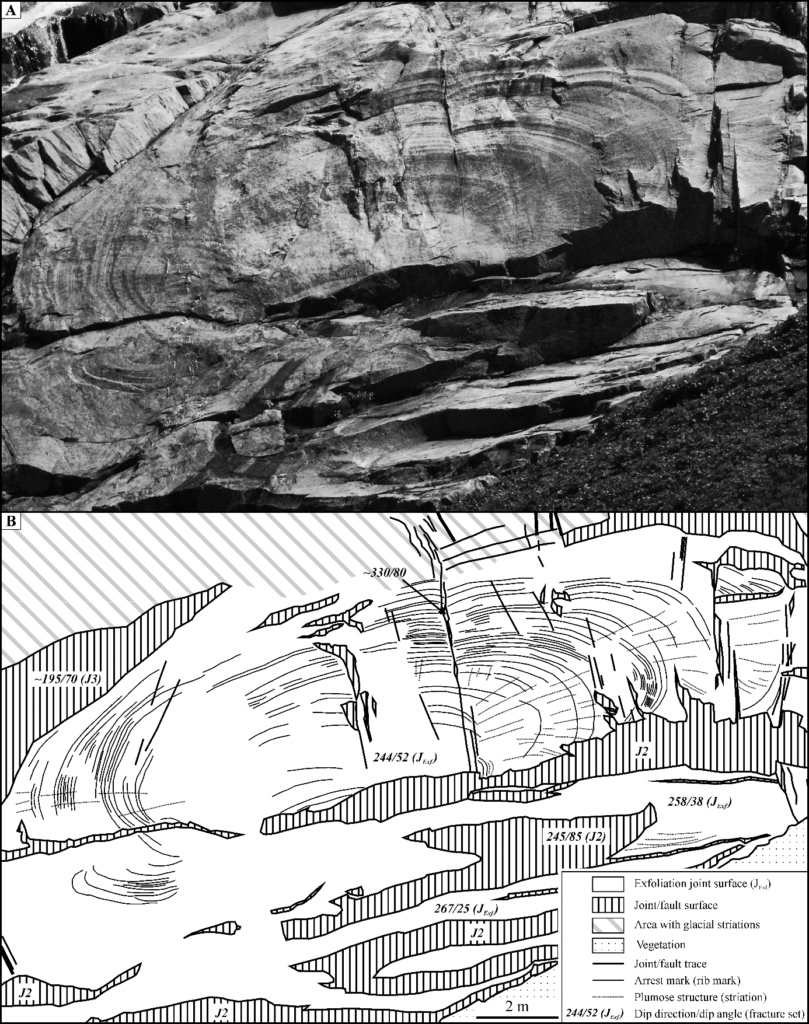 Fig. 2: Example (A) and sketch (B) of an exfoliation fracture in the Aar Massif with superb fractographic features. 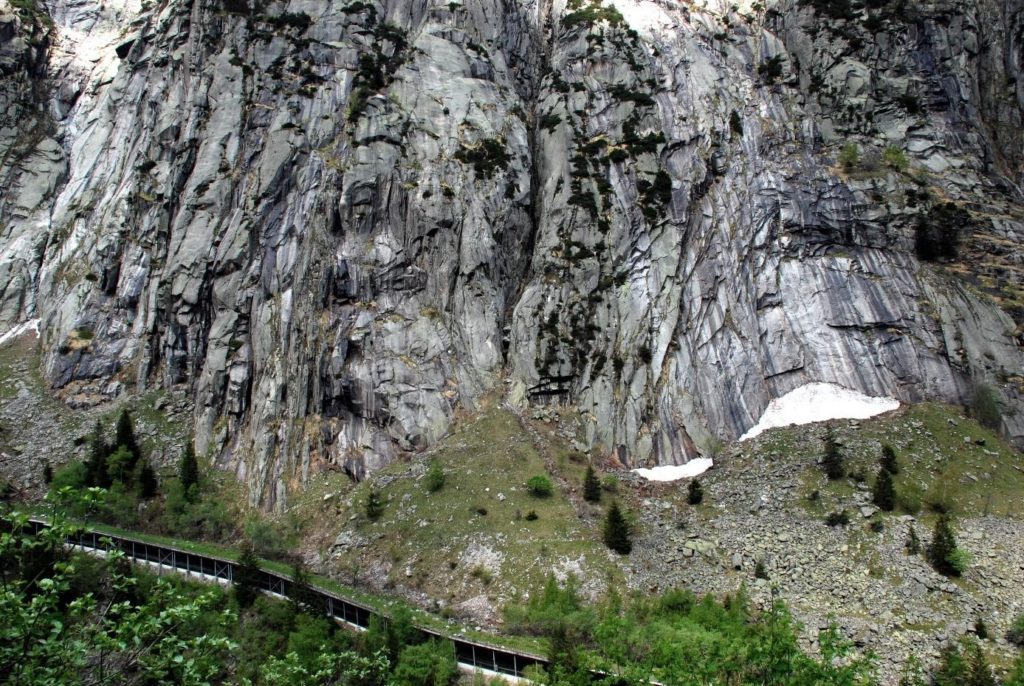 Fig. 3: Example of a steep slope cut by tectonic and young exfoliation fractures, and a railway gallery in the Schollenen Gorge. 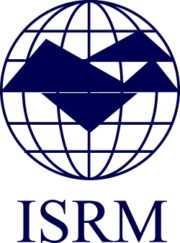